The national office of the American Association of University Professors has sent a letter to Emory University President James Wagner supporting our local chapter’s call for the administration to suspend implementation of the cuts to programs and departments (which were announced September 14) pending substantive faculty review. After noting the many ways in which the faculty were not given “adequate opportunity to exercise its primary responsibilities in this matter,” the letter closes as follows:

We share the Emory AAUP chapter’s concerns that adequate standards of academic governance have not been met in the administration’s actions to close programs. Further, we are troubled that long-serving faculty members appear not to have been afforded the due process protections that, under our standards, should be accorded those who have exceeded the maximum probationary period. We support the chapter’s call for a substantive faculty review of the process and resulting decisions and for the suspension of any implementation of the closures pending such a review. 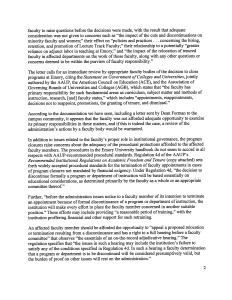 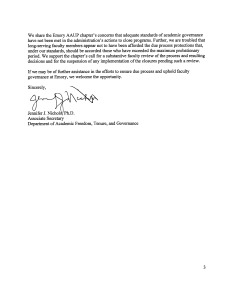 The  purpose of the American Association of University Professors is to advance academic freedom and shared governance, to define fundamental professional values and standards for higher education, and to ensure higher education’s contribution to the common good. The Emory University chapter is deeply committed to furthering these aims.

For other recent news and updates, visit us on facebook.